Long time ago, as I was just certified as an Advanced Open water Diver, I wanted to go on an adventure. So I booked myself a trip on a live-aboard. All guests but me were Brits and quite experienced divers. We were heading to the Brother Islands and on our way we started to have great time. I was so excited 😉

That first day we did a lot of travelling, 2 dives and lots of time to get to know all the people on board. As we were sitting in the salon one of the other guests was reading an article in ‘Diver’ called ‘Jumm, jumm yellow’. It was a shark story and we were about to go shark diving on The Brothers so we were all interested. The story was about how sharks can see only a selection of colours, like cats. And that yellow is actually one of the colours they see best. 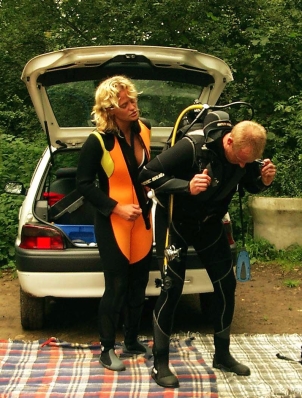 Now this was around the year 2000 and in those days we still had loads of colours in our suits. Mine was bright orange with some yellow. And because of that orange the joke started of ‘jumm jumm Orange.

As we arrived on the brothers, night had already fallen. Most went to bed early, but I was so excited about shark diving the next day, that I did not want to sleep. So I stayed on the sun deck enjoying a beer. The captain was on the dive deck, lights on, fishing with a single line. Throwing it and then pulling it in fast. Never seen that before. He caught a mackerel, brought it on the deck and hooked it properly on the line. Throwing it out again and pulling it in really fast while catching a giant barracuda. WOW.

I asked him why he pulled in the line so fast. And he replied: ‘so I only catch barracuda’. Me being blond did not quite get what he was talking about, so the Captain showed me.

He threw another line, no bate, and shortly after he caught another mackerel. Then re-hooked and threw out the mackerel and pulled it in, not so fast but slow this time. I was looking at the water, on the sun deck, with my legs dangling over the side. And suddenly there it was, coming from the deep and jumping in full length out of the water. With the mackerel the captain had caught a barracuda. And that barracuda was fighting, since he was on the line. And that caught the attention of a silky that tried to catch the barracuda. And the Silky shark jumped out just a meter or two behind the boat. WHAA that scared the living daylights out of me hahaha.

Next day, as I woke up, it was still dark outside. The sun was about to rise and in my bikini and towel I got myself a cup of tea and sat on deck. I could hear something in the water, but could not see. So as that Egyptian sun comes up, like a ball of fire thrown in the sky, I saw what I heard. That same Silky sharks circling the boat. GREAT. I am about to go shark diving for the first time, I was scared shit! 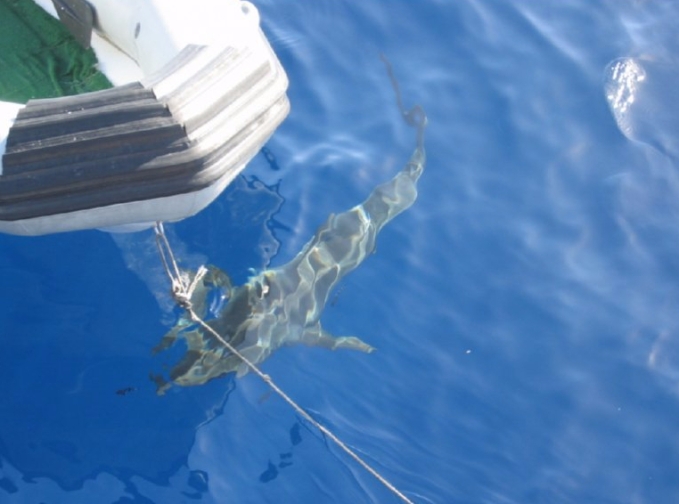 The guides on board were really good. They gave us a proper briefing on how to dive with sharks. Told us all the things not to do, like behaving or smelling like food or anything else that might attract the sharks attention. And they gave us an experience with the silky that was circling the boat. A crew member sat in the zodiac, tied on to the main boat, and just tapped the water with his hand. In no time the silky came towards him. Then they dropped a bucket on a rope at the bow and the silky was off again. They repeated this a few times to show us how interested this silky is in anything that moves weird.

Al right we got the message and got changed into our gear. I was quite nervous and me and my buddy Kevin, who I had met on this trip, decided to stay close to the guide. We rolled back negative and dropped straight to 40 meters. We never got to see the silky on that dive and honestly I was a bit happy about that. After the dive however some of the others came to me with the ‘jumm jumm orange’ again. Saying that they had seen a shark on my tail almost all dive. I had not seen the bugger and thought these guys were just joking. This joke kept on coming back after every dive and I was getting sick of it. I decided to just ignore it as much as I could, how little did I know.

As we made our last dive on the brothers, Kevin and me were no longer on the guide’s tank, I had that magical shark moment. Towards the end of the dive at around 10 meters of depth, I saw something that looked like a torch. Back in those days they were very expensive and I signalled my buddy that I wanted to drop a few meters to check it out.

As I went down, I looked into the blue. I saw this blob appearing, a shark with a tremendous long tail, a thresher shark. What stunning animal as I saw it passing by me. But then it turned and passed by again, turned again and again. Slowly this animal was coming closer to me and as it did I got more nervous. Taking gulps out of my tank and I though I need to stay close to the reef and deeper than the shark. In the end this beauty came maybe 2 meters away from me. WOW!

After the dive I walked up o one of the other ladies on board. And I asked her about the ‘jumm jumm orange jokes’. She replied these are funny but actually not really just jokes. She said that all week she and her friends wanted to dive behind me, cause for some reason a thresher shark kept appearing behind me. God… I had never seen it. She told me this shark had some marking on the body. And as she described it to me I realised that is exactly the shark that I saw, hahaha…

Of course now I know there is no reason for being so scared of sharks. We are not on their menu but they might have an interest in us as we have in them. But ever since that dive I keep my eye out all around me. And ever since I am in awe of these great animals and especially live-aboard diving.

I am just a diver. I travel and work on safari boats, organising liveaboard trips. I love being under water. Meeting marine life, making new friends, still learning to make better pictures and movies. And what I share here? My diving adventures, pictures and movies that I made, maps of dive sites that I designed and I try to teach some of the stuff that I have learned over the years. Hugs, Anke