One of the biggest surprises that I had as I started diving in the Maldives. And for sure a dive, that according to our guests, that is rated as the best of the entire week. If you get a chance to do this dive site… You will be in for a great surprise 😉

The first time I got a chance to dive this site my colleague Thiti briefed me a few things. First of all don’t touch the rocks. There are some morays around and here in the Maldives they tend to bite you as you come to close. They are quite territorial, so don’t touch their home.

Secondly if you are lucky you can find some sting rays there. Not knowing what kind, but for sure as we see some, they tend to be quite big.

Third this dive site is on Chicken Island. It has this name, because the Island used to have a chicken factory on it. These days the factory produces tuna products, but the name remains chicken island.

So after this briefing we went out with the dhoni. The location is in the North Male Atoll and due to the itinerary-must-dos we are not always able to jump this site. The Dhoni took us close to the jetti and as I submerged I followed Thiti’s lead. Honestly at first there was not a lot to see at all. The reef is mainly rock with some red tooth triggers, some butterfly fishes, nothing special. The current was small and coming from the north, and as we took the reef on our left, we slowly drifted towards a slope of small rocks and pieces of coral. Then I heard Thiti tapping his tank and I looked into the direction in which he was pointing. Viz was poor, maybe 20 meters or so, but I saw what he was looking at. A pink whip ray that was actually swimming towards us. Shortly after we saw a few more and followed them up the slope.

We swam under a massive school of schooling banner fish. My god I have never seen so many! Whahahaha its hard to see the water in between the fish… A school of yellow fin barracuda just passed by as ramora ‘s came into view. Holymoly they are with a lot of m, maybe 100-150! Oh my god. No I get why they call this Fish Tank. Its like an aquarium!

As we shallow up even more rocks appear at about 7-9 meters. And they are swamped with morays. Really FAT morays… these guys are obese hahaha. And so many. Not just in numbers but also different species. Like the green moray, barred moray, peppered moray, white mouth moray, yellow moray, spotted snake eels and one that I still need to determine. They are entangled and hanging out of some of these holes like spaghetti twisted in a fork! This is not real!

Loads of boxer shrimps around cleaning the morays mouths, juvenile oriental sweetlips dancing like jojo’s on speed. Some puffers with no fear of divers. My god what an amazing site.

I was simply awestruck at all this marine life, never have I seen anything like it. Little did I know, as the show had not started yet. Half-way through our dive, as I was at about 5 meters, one of the whip rays started swimming against the jetty, the banner fish came swimming towards us and you could feel the energy step up a nudge or 10. As It turned out the factory was about to close and dumped some tuna carcasses from the jetty. And that’s when it all turned into this energetic fish soup! More rays came in, like the blotched stingray, pink whip rays and porcupine ray. Pfffff what an amazing site.

Now I am not a fan of feeding at all. But we humans tent to dump things into the ocean. Fortunately here they only dump tuna remains, so in the end nothing goes to waste. And as an extra we get to see a special site 😉

I took a lot of footage during my last dive there, chech m out below… I hope so show you some of my video’s soon.

Check out how long their tails are… 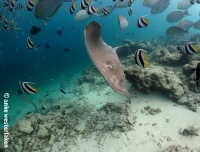 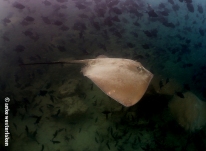 Great in numbers and clear in colors 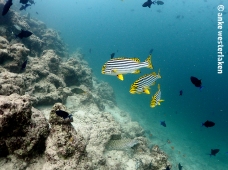 Fuseliers passing in the back at Fish Tank Maldives

Did you know that these have a span of over meters? 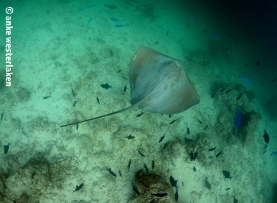 Why are they called pink?

Big and small ramoras loking for a new host 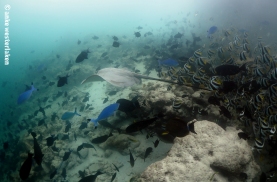 Simply stunning moments to meet so many rays A glorious honey comb moray checking us out 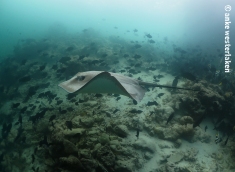 Only here these rays are not shy at all 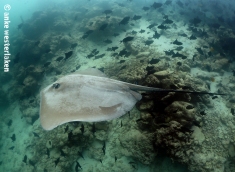 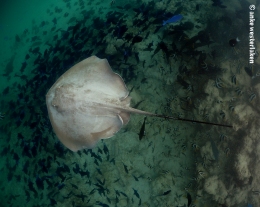 On her way to the jetty 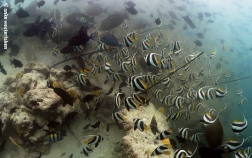 How many sting rays do you see? 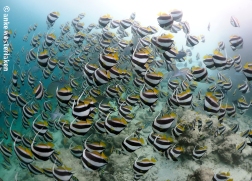 I am just a diver. I travel and work on safari boats, organising liveaboard trips. I love being under water. Meeting marine life, making new friends, still learning to make better pictures and movies. And what I share here? My diving adventures, pictures and movies that I made, maps of dive sites that I designed and I try to teach some of the stuff that I have learned over the years. Hugs, Anke